"G" is for Gambo, Gander, Glovertown & Glewood/Appleton.  These are just a few of the many  communities in this region that played a significant role in the assistance that was provided to the people from all over the world on that unforgettable day in September of 2001.

I live in Gambo, which is a mere 46 kilometers ( just under 30 miles) east of Gander.  I remember vividly the events of that sunny, fall day.  I, like many others, watched in horror. By supper time that evening, all churches, volunteer groups and organizations were in motion.  Our little town was called on to house some of the passengers....and we were ready!!  Every household that could was cooking, preparing sandwiches, dropping off fresh towels, sheets and pillows.  The local leaders went in to action and were very well organized.   The school shut down and the gymnasium was quickly converted for a sleeping area, with cots, pillows and linens.  Different classrooms were designated as clothing pick-up points, there were toiletries, baby items, over-the-counter medications...the list goes on and on.

The churches all went into action and church halls became dining areas.  The food was magnificent, everyone prepared the best of their best for our guests. Then the buses came.............remember the population of our little town of Gambo was 2200....our population almost doubled!  It's amazing how you recall things...as I just typed that last line, I remembered that the bus drivers were actually on strike, and they came back to drive all these passengers on the big yellow school buses!

Our local town hall stayed open round the clock..the library as well, with internet access for our visitors and use of the telephones.  The pharmacy stayed open, all the little shops and stores, especially the liquor store.

Below is a short video that gives an idea of the events of that day, from our perspective

Many great friendships were made during that time.  One couple even fell in love and got married!

My husband Roger and our daughter, Rana, hosted special guests as well.  I had just prepared the largest salad I had ever made (actually in my stainless steel bowl I use to make breads), and was dropping it at our church hall.  There were people everywhere.  Just to keep things in perspective, our church hall only has two bathrooms--one toilet and sink in each. Many of the people were being dropped at the school to shower or being taken to private homes.  I came home with four people that evening, two couples.  Our house became their home base.  It was heart-wrenching for them to watch the images on the news for the very first time.  They had been on their planes, and then directed to buses to be brought out to their designated "wait-areas", so no television was available to them until now.

Over the next three days and nights, many people were at my home,  everyone in our little community brought in guests and served them up Newfoundland hospitality at its finest.  Our guests ate mussels, moose, rabbit, codfish, berries, cakes and tarts, all served in traditional recipes....and most of them loved it!!

My mom, who was 75 at the time, and living on her own, also did her part.  Now you have to know my mom....she is now 86 and still drives her own car and is actually contemplating buying a new one!!!  Anyway...back to my story.  I was stopping in to pick up some food she had prepared to drop off at our church hall  with my things.  When I opened her front door and looked in through the entry, a very tall, dark and handsome man of about 40 was reclined in her favorite chair with the remote, intently watching the NBC news.  What really threw me off was the fact that he was wearing my mom's housecoat!!!!!  He looked at me and smiled, quite contentedly, and stood to introduce himself............turns out he's a physicist with NASA!  Right then, mom popped out of her laundry room with all of his clothes, neatly pressed, ready for him to put back on.  It was so funny.  Mom had insisted that he give her all of his clothes for her wash, dry and iron for him, while he showered....and he did!!!  That's my mom.  Anyway, he used my mom's place as his home base and they are still friends today.

Here's a snap of my mom, just a week or so after her 86 birthday--September 2011-ten years later. 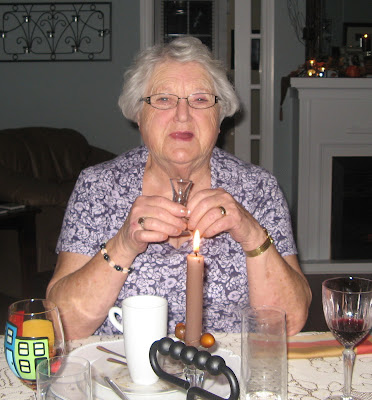 Most of us still hear from many of our guests regularly.  There are hundreds of beautiful stories I could tell.  Many locals have gone to places like Germany, Florida, New York & Ohio, just to mention a few, to visit friends they made during that time.  Many host families received wonderful gifts like new computers, schools actually have had scholarships set up---all from the generosity of our guests from September 2001.


Anyway, sorry to have dragged this out so long, but I could go on and on.  There are so many stories to tell....all good ones.  In closing, hopefully there will never be such a terrible event again in the world....but if there is, you can be be sure, we'd all do it all over again!!