A Glorious Day in Germany (Part 1)

All six of us were really looking forward to seeing a little bit of Germany, especially because a former teaching colleague of my niece, Tonya, was picking us up and giving us a bit of a private tour.  The sun was bright and we were off the ship by 8:30 am.  Tonya's friend Andreas, was picking us up at 9:00 am,and right on time, he pulled up in a rented 9-passenger van.  He was well prepared for a day of sight-seeing, equipped with bottled water, brochures and maps!  This was the first time that hubby and I had met him, but after only a few minutes, it felt as though we had known him forever...what a great guy.  I hope we get to return the favor someday.

We had to drive for about 80 minutes on the German autobahn to get to Andreas' home.  That was a little scary at first, but really quite like our own divided highways, except it is acceptable to drive much faster.  There is no speed limit, but a speed advisory of about 130 km per hour(approx 81 mph).  We were actually traveling, many times, at a much higher speed than the advised rate, and still vehicles were passing us like we were stopped.  My heart rate was probably much higher than our speed for most of the drive--haha.  First, Andreas took us to meet his wife and beautiful little girl, who was soon to turning 1 year old.  We had a lovely visit at his brand new home, and then set out for some serious sight-seeing.

He drove us in to Lubeck, which was one of the day-tours offered through the cruise-ship.  Oh wow....you talk about stepping back in time in some parts of this city.

First, we came upon this gem that literally took my breath away - Holstentor, which is actually an ancient gate marking off the western boundary of the old center of the city of Lubeck.  I know....I was in heaven!!!!  It was actually embarrassing how many photos I took---I just wish I could share them all with you here.  You'll just have have to pop over to my house, for tea or coffee, and look at my albums and scrapbook of the entire trip. 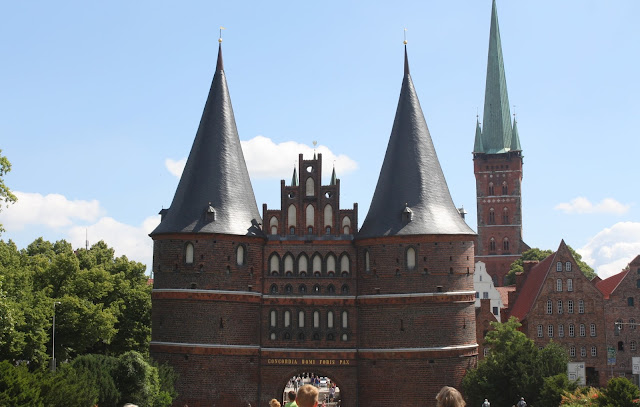 Very close by was this - the The Salzpeicher, or salt lofts, which were once used to store salt herring. 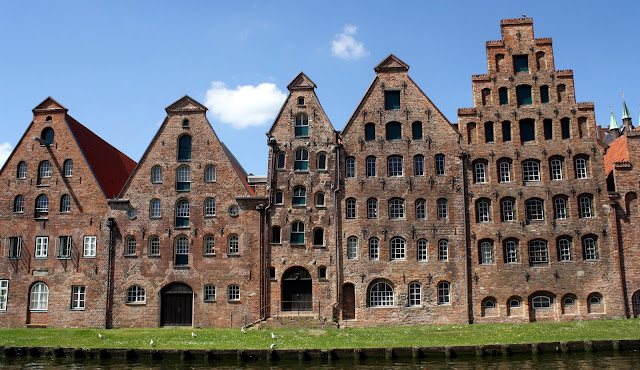 We then visited St. Peter's Church, which one could see from anywhere in the city.  The building, inside and out was truly magnificent........... 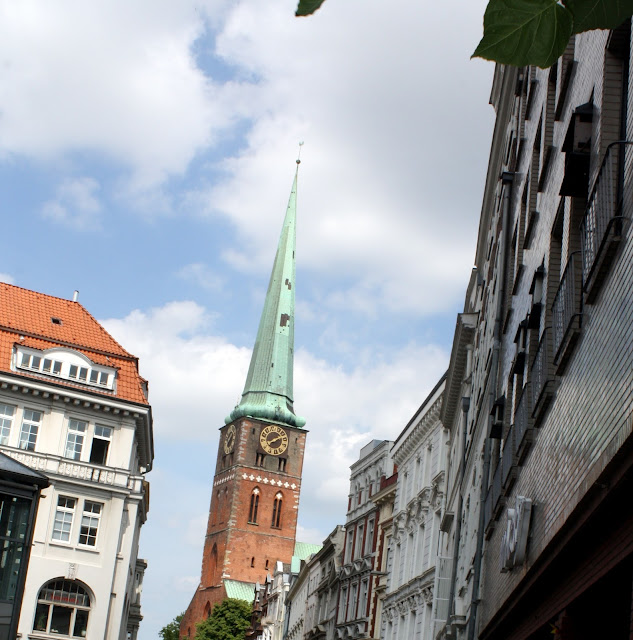 but the view from the steeple was not something I was fully prepared for, nor will I soon forget.  Have a look....... 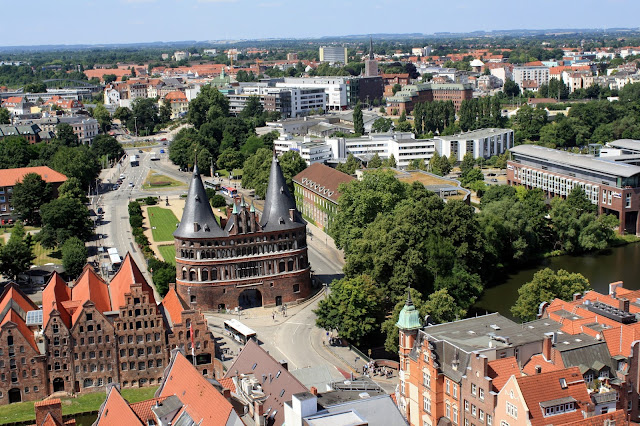 When you see how small these buildings look from the steeple, you get an idea of just how high the tower of the church is.  The gate and the old salt lofts looked so small from up there. 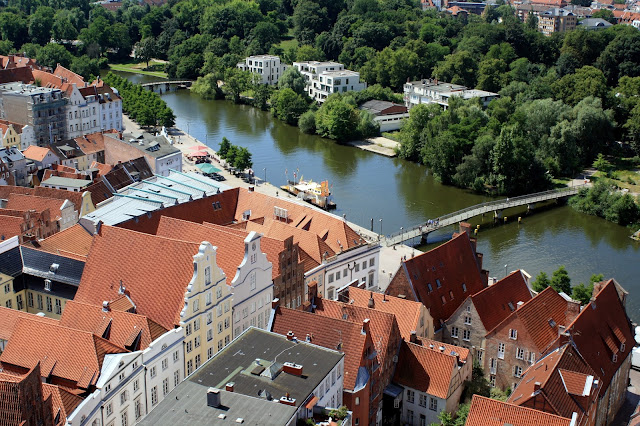 We visited St. Mary's Church as well, which was so beautiful---words cannot be found to describe it....... 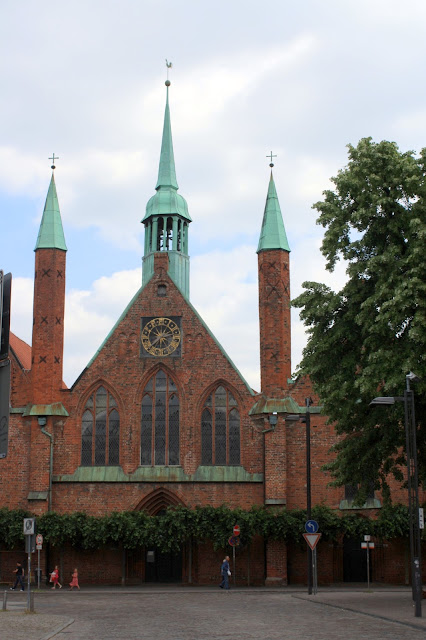 We saw sights so may overwhelming sights around Lubeck.  Our surroundings were almost too beautiful to be real..... 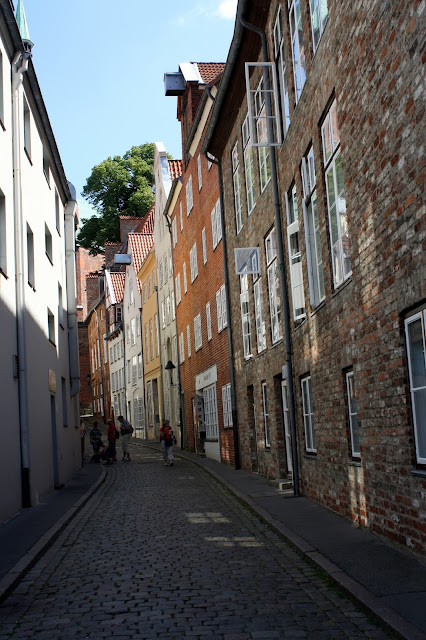 As we strolled along in these fairytale-like streets and courtyards, my imagination was in overdrive.  I had only seen places like these in movies, and could hardly believe my eyes.  I didn't want this day to end--it was just that beautiful.  I would have loved to stroll about after dark, when these beautiful houses had the lamps on, and just maybe I could catch a glimpse of the inside of these magical old homes. ( I know-- that's probably a bit weird, but I can't help it--that's how I felt) 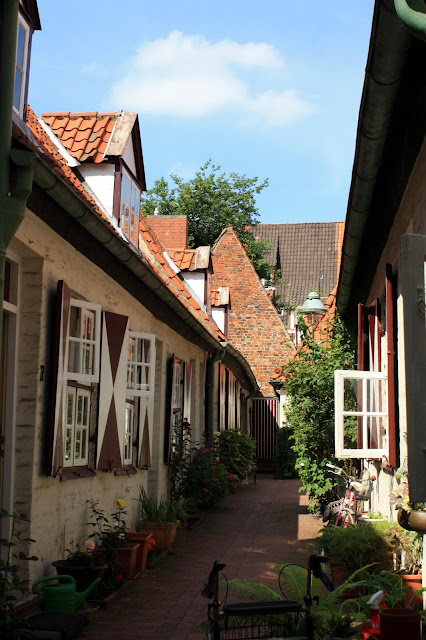 I could just imagine the lady of this house, riding her bicycle to the bakery in the early morning and coming back with fresh breads and for breakfast..... 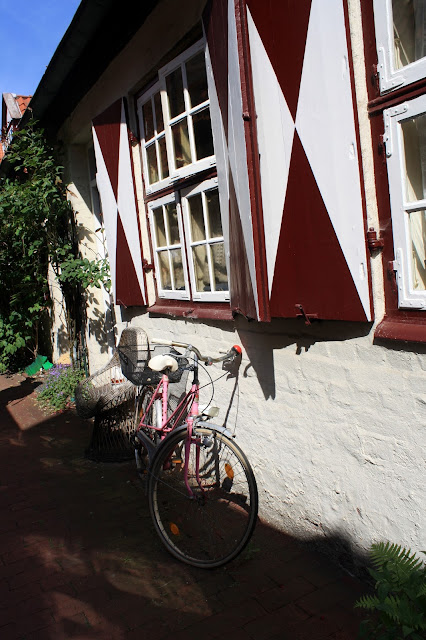 Did you ever dream that a simple alley-way could be so inviting?? 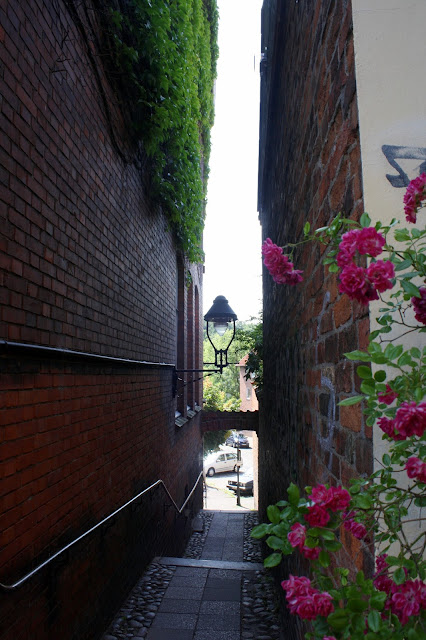 After much wandering, we reluctantly decided to go to the square to rest our feet and feed our bodies.... 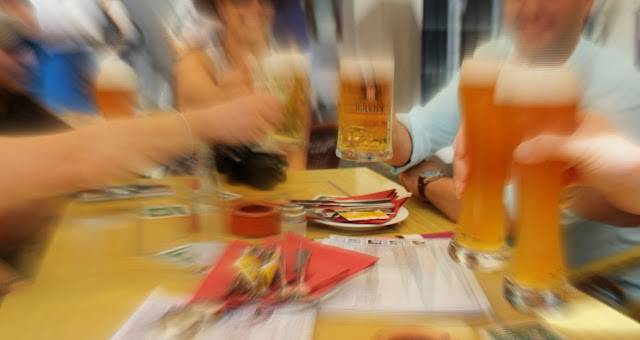 I tried a traditional German version of wiener schnitzel, with pork.  The true original dish is Austrian and made exclusively with veal.  I was not disappointed......Yummy... 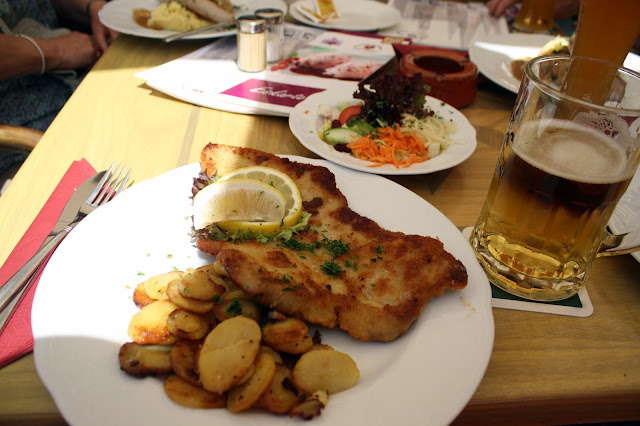 This amazing model of the city of Lubeck is in the center of the market area, where we ate.  It is quite a work of art and is set up in braille so that blind people can actually read it and feel the heights of the all of the different buildings.... 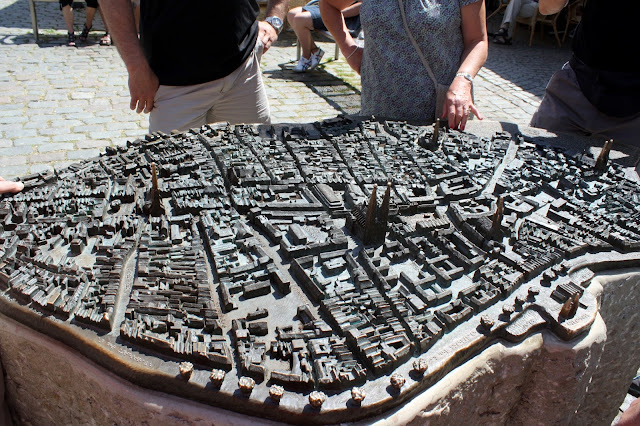 As we made our way back to the van, we crossed a canal and came upon this....... 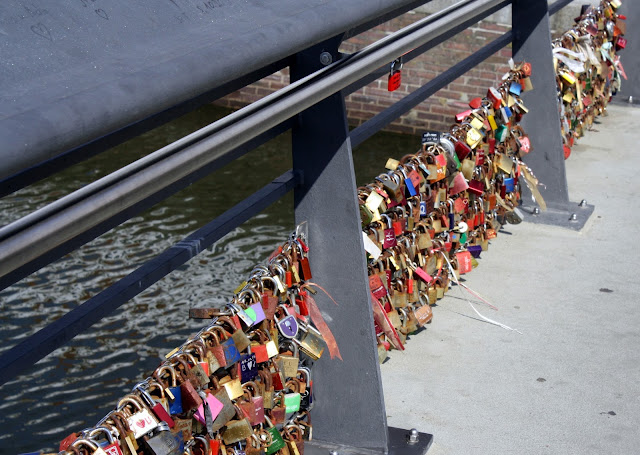 These are known as love locks.  The custom of affixing a padlock to fences, gates, bridges or similar public fixtures by lovers to symbolize their everlasting love.

One last photo of the charming medieval town of Lubeck, which is also a UNESCO World Heritage site---

-is it any wonder why?