There have been some big waves in these parts over the past couple of days!!!
Check here  for a CBC news article about the situation.

I got all geared up last night, mounted my camera on my new tripod that Santa
delivered, and made a plan to head out early this morning, to "catch some waves".
I am quite sure, however, that when you hear people say that, it usually means
something quite different that what I did.

Early rise-minus 7 Celsius, but with a huge travel mug filled with piping
hot coffee------off I went. to get a few shots.  First, I drove right over by the
ocean, here in Flatrock. It was really cold, and as I was driving the appoximately
1.5 km to the lookout point, I was hoping I wouldn't be disappointed--
---I wasn't!

The thunderous roar of the waves was almost hypnotizing, and I wasn't
the first, or only one out taking pictures.


Wow, right about where these huge waves are crashing, is where I often sit
during the summer, after one of my walks on the trail just up over the
other side of these rocks. 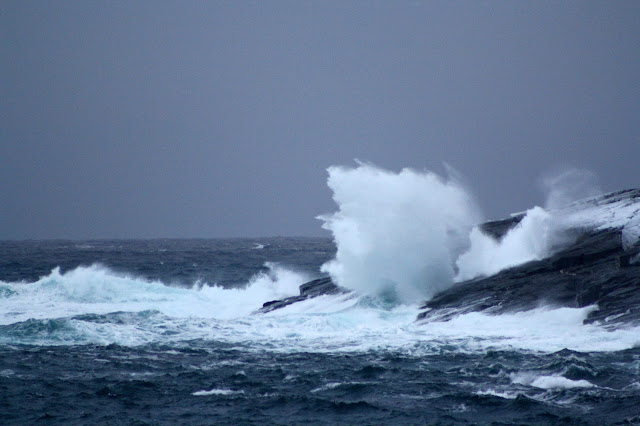 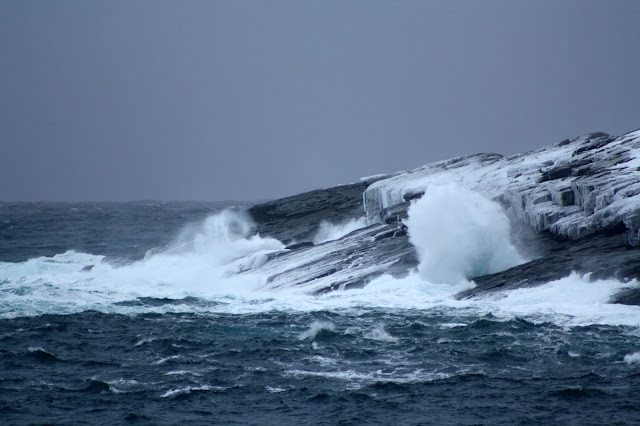 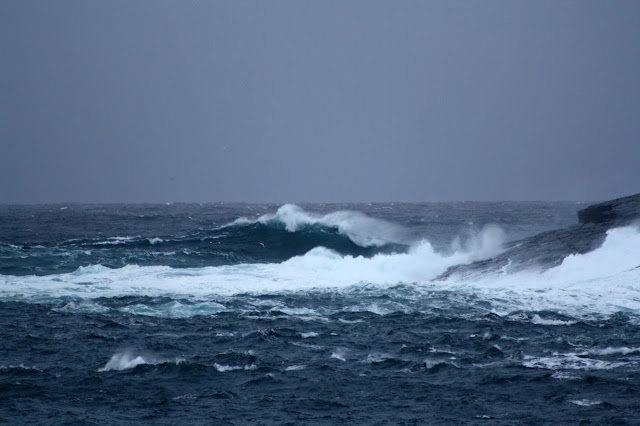 I took these two shots from another viewing point in Flatrock.
The surf was crashing right in over the wharf. 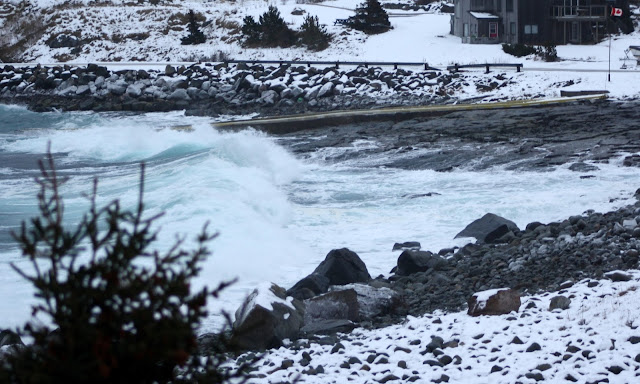 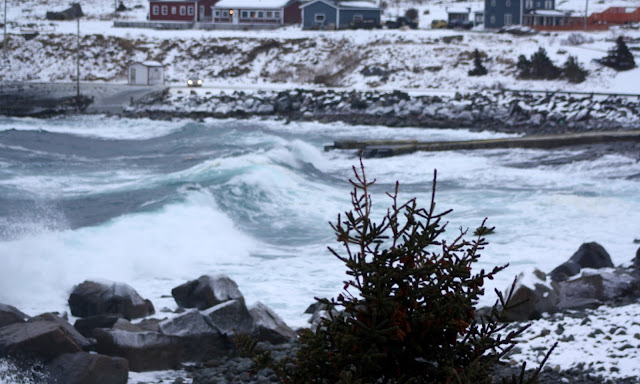 After chatting with a few other brave souls, I decided to head on over to
Torbay, just a the other side of Flatrock.  There is a beautiful little Anglican
church there.  The church sits on the hillside,with a little graveyard just down
over the bank overlooking the ocean.

I wondered if I might get a nice shot from the church yard......
what do you think? 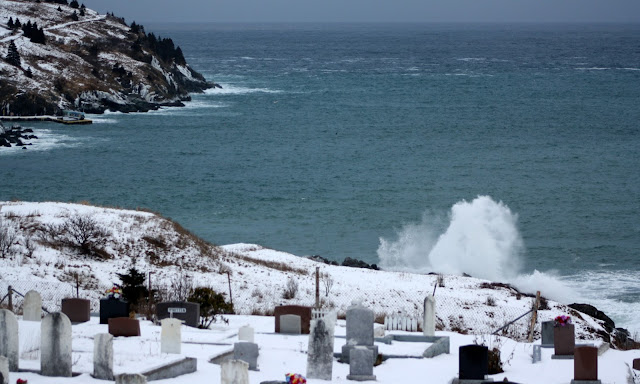 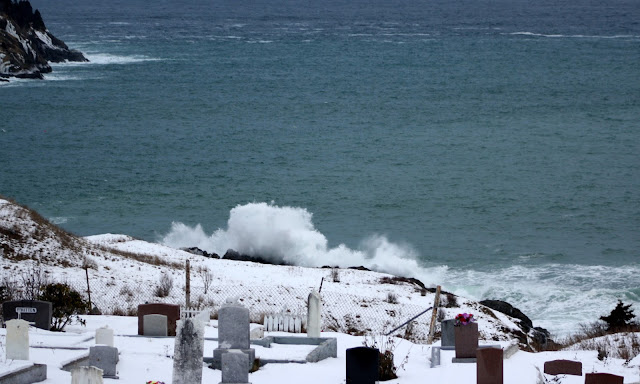 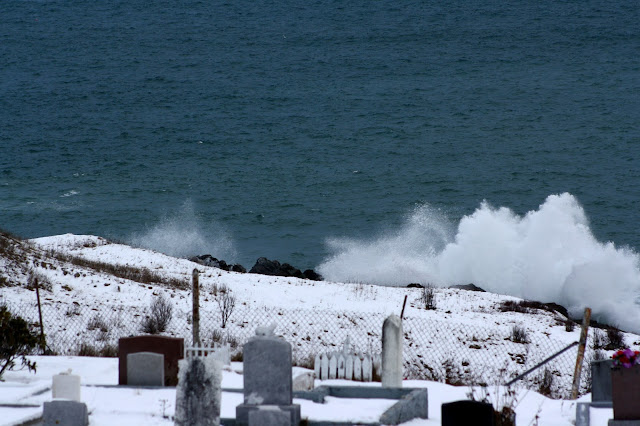 By now I was getting pretty cold, and my coffee was all gone.  However, I
decided that since I was out, I may as well check out Middle Cove Beach.
It was only a few minutes away, but is quite a tourist attraction any time of year.
With the news of the big waves, I expected huge crowds, and thought
I would just do a drive-by.  I was pleasantly surprised--there was only about six
vehicles in the car park, so I parked, grabbed my camera and
headed to the beach area.
I didn't actually go down on the beach, as the waves were really coming in
there, but did manage to snap a couple of shots.... 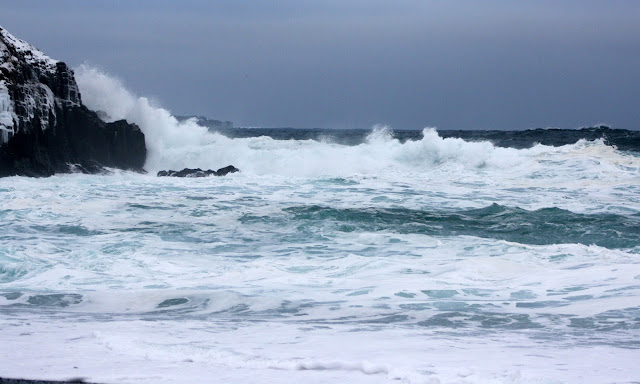 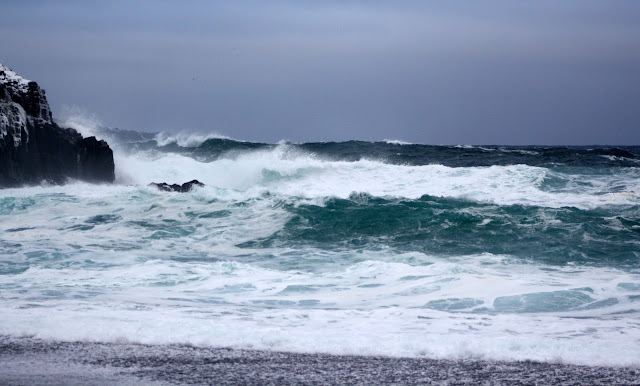 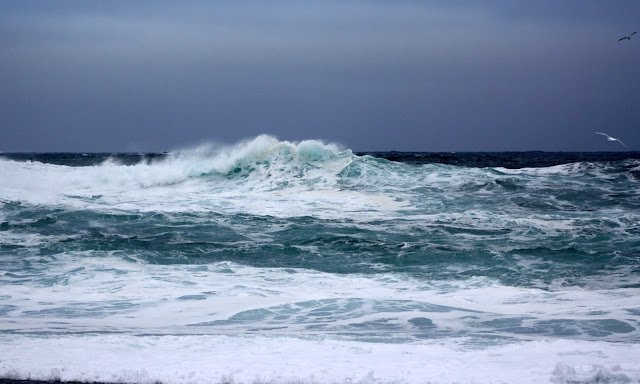 I came back home,sat in front of a roaring fire, and ate delicious left-over fish & brewis
with strong, hot coffee for my breakfast--just like mom used to make!!